Reasons to come in to action. More will be added.
– Arms trade lobby
– Sonar
– Arms deliveries for war and repression
– Promoting and profiting from the war against migration 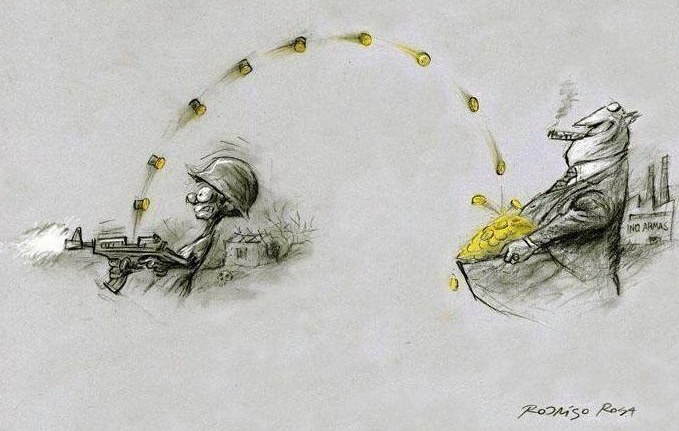 Arms fairs play an import part in the international arms trade. They are the places to meet and network and provide the opportunity for companies to present themselves and showcase their new deadly goods and services to potential customers. Industry representatives, government officials and military and security personnel meet around the year at conferences, fairs and round tables. They keep the military-industrial complex and the influential industrial lobby going.

There are large international arms fairs, like the bi-annual DSEI in London, and more specialized ones, such as the UDT. Still the UDT expects dozens of exhibiting companies and some 1500 attendees from 40 countries, including many official government delegations.
With this the UDT and other arms fairs play a pivotal role in the trade that fuels wars, internal conflicts, repression and human rights violations. The enormous amount of money that the world spends on developing and buying arms come at the cost of meaningful expenses for health care, education, housing, international development, poverty reduction and so on. Arms companies earn big money from death and destruction.

One of the underwater technologies that is widely discussed during the ‘Undersea Defense Technology’ (UDT) arms fairs is sonar. Military ships use these sound waves to navigate under water and locate targets. However, the use of sonar has disastrous consequences for marine animals.

Between 1960 and 2004 there were more than a hundred inexplicable strandings of groups of healthy whales, dolphins or porpoises. Scientists have long been puzzled. Until a clear connection was made with the use of sonar by military ships. Strandings followed, for example, after large-scale maritime exercises involving the use of sonar. The sound waves chase the animals away, cause confusion, disturb their eating behavior and their mutual communication. In 2005, a report from the United Nations Environment Program (UNEP) concluded that “high-intensity marine sonar poses a serious threat to whales, dolphins and porpoises that depend on sound for survival”.
The US Navy actually confessed guilt and here and there the use of sonar was banned. But by no means everywhere, in the summer of 2018 dozens of dead whales were washed up on the coasts of Ireland and Scotland. Following a new convincing study, scientists called for a ban on the use of sonar at the start of last year. The military-industrial complex is not concerned about it and continues to produce and use sonar applications.

Arms deliveries for war and repression

Many companies that are present at the UDT arms fair are responsible for arms deliveries to numerous dubious customers. A recent report by Pax and the Fair Bank Guide sums up a number of such arms exports. Lockheed Martin and BAE Systems, the biggest arms company of the world respectively Europe, are important arms suppliers for Saudi Arabia and the United Arab Emirates. With this they keep the horrific war in Yemen going, contribute to state repression and to the involvement of these countries in other wars in the region, such as the one in Libya.

Other controversial customers are nuclear armed neighbours India and Pakistan, that have a very tense relation. Last year this almost led to war on several occasions. Lockheed Martin, Northrop Grumman, Raytheon and Thales – all exhibitors at the UDT – sold them arms in recent years.
Repressive regimes and notorious human rights abusers, such as Chad, Egypt and Turkey, are also on the customers list of companies present at the UDT. Next to the companies already mentioned this concerns for example Leonardo, the Naval Group. Safran and ThyssenKrupp Marine Systems.

Finally, remember that all the arms sales to western countries, in particular the United States, contribute to the many wars they are involved in. The continuing intervention wars in the Middle East for example, that cause many victims, force people to flee and feed and strengthen a cycle of violence. The only winners are again arms companies and other companies that profit from the western desire for commodities and hegemony.

Promoting and profiting from the war against migration

Several companies which are present at the UDT are deeply involved in boosting and militarising border security. Dutch shipbuilder Damen, for example, has delivered border patrol vessels to many Mediterranean countries, including Libya and Turkey. The notorious Libyan Coast Guard used Damen vessels for violent operations against refugee and rescue ships. The UK border forces also use Damen vessels to patrol the Channel.
German Hensoldt is the former border security division of Paneuropean arms giant Airbus. It plays an important part in EU border externalization efforts. The company sold large amounts of radar systems for border and coastal surveillance to countries in the Middle East and North Africa. The German government donated Hensoldt radar and other border security equipment to Tunisia, to stop refugees before reaching Europa. Hensoldt also trained Tunisian security forces to use this equipment.
Other companies that are active on border security include Thales, Raytheon, Safran, ThyssenKrupp Marine Systems, TNO and Lockheed Martin. Aircraft from the latter company is used for surveillance flights on the border between the US and Mexico.

The border security market is rapidly growing, and thrives on increasingly repressive migration policies. These policies don’t come out of the blue, they are for an important part a result of succesful lobbying by the military and security industry. This industry has managed to put forward a narrative of framing migration as a security problem, a threat. This narrative underlies for example European and US migration policies. Subsequently representatives from the industry succeed in positioning themselves as experts in this regard, with the solution at hand: the use of military means to stop refugees.
Meanwhile the current migration policies have devastating consequences. Boosting and militarising border security has led to more violence against refugees, refugees stranding in inhumane circumstances or being forced to more dangerous migration routes, which also drives them into the hands of criminal smuggling networks.